Things are progressing well (and expensively!).

The modern ceiling in Room 4 which I had not wanted to remove (because it butted onto ancient plaster on the opposite side of the room to the fireplace) started to detach all along one side.  The real possibility of it coming down by itself and pulling all with it, forced the decision to remove it.  This was done under the watchful eye of Dr. Brooks (the Consultant Archaeologist) – thankfully with no damage to the old plaster, wattle and daub.  The effect is really good (see below).  A 19th century decorated slate fragment has also surfaced (also see below). 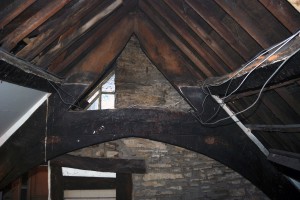 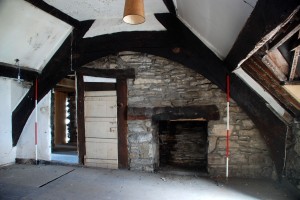